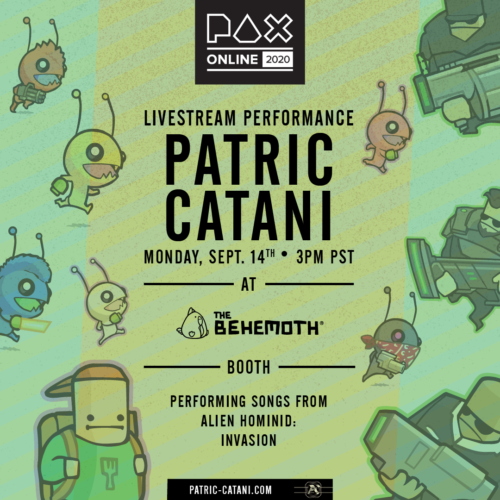 The San Diego based video game developers The Behemoth asked me to perform my latest video game soundtrack for “Alien Hominid Invasion” (work in progress) on Pax Online via live stream. This performance was shown via Twitch and Youtube and got re-streamed on the official Pax Online channel. I had tons of fun putting all this new material together into a set and it was my first concert in this difficult year of the rat. During my preparations, I made friends with the Otamatone and even got myself a mini Theremin for the right sci-fi touch. Thanks to everyone again who joined the livestream and thanks for all the nice reactions. It was delighting and flattering to receive such a positive feedback! Looking forward to present you more of the soundtrack, when the game is officially released. You can actually still try out the free beta demo of Alien Hominid Invasion on Steam! Hope you enjoy the game, the music and this little concert of mine! Check below!