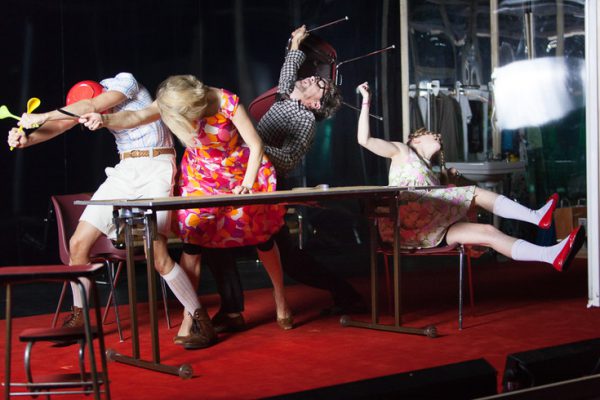 I´m doing music for a new theater play at Theater Basel directed by Felicitas Brucker.
The Play “Retten Was Zu Retten Ist” will have the premiere on Nov. 4th 2016.

“The concept is old fashioned but still very effective: the perfect family, which then gets caught up in its own idea of perfection – while only wanting one thing: a more beautiful life. Behind the scenes there are real people who have forgotten how to live because advertising has completely taken over their entire lives. These are amateur protagonists trapped in a world which they cannot see through. They feel uneasy playing their roles, which are never identical to themselves. They subject themselves to constant scrutiny and product testing. They are advertisements for a society with no basis. Everything here is provisional and still under construction, remorselessly influenced by anticipation and reaction.” Philippe Heule

Philippe Heule takes a look behind the scenes at the advertisers’ average family, cast according to the laws of the market, familiar from tv ads and all manner of print advertising. It offers us an entire palette of Western products to buy, ultimately including itself – the utopia of a perfect world in miniature, in the kitchen, at the dining table, in the living room, in the bedroom. It is a backward-looking petty bourgeois utopia: Biedermann at the Baumarkt, an idyllic do-it-yourself life.

The young Swiss author Philippe Heule studied directing at the ZHdK and spent the 2015/16 season as writer in residence at Theater Basel as part of the playwriting development programme Stück Labor. This model provides young playwrights with the opportunity to develop their dramatic writing in artistic dialogue with a theatre and its ensemble. Heule is a founder member of the theatre company helium x and has already directed his own texts. ‘Save What Can Be Saved’ is his second play.

It is directed by Felicitas Brucker, whose production of Darja Stocker’s ‘Nowhere in Peace. Antigone.’ was seen at Theater Basel in 2015/2016 and was invited to the Autorentheatertagen 2016 at the Deutsches Theater Berlin.