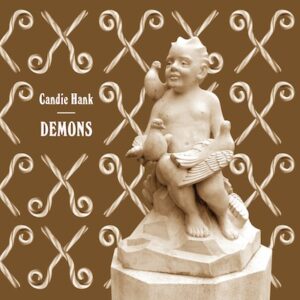 On Demons Candie Hank combines things that actually can’t be combined. Arabesque melodic lines, ethereal female choruses, high-speed drumming and Jamaican spoken word, for example. He switches elegantly and effortlessly from a typical Candie-like, slightly wooden Monty Python soundtrack with a tea dance sample to an acid bass line. He does this with a smile, a finger exercise. The wonderfully lunatic Babyshka Demona features – you’ve already guessed it – balalaika samples. Dervishes from the Carpathians playing stringed instruments of unknown origin to convulsive beats in Transylvanian Voodoo. And the sly electronic polka madness, Candie Hank’s trademark, can be admired on Elevator Life in its purest form. Giving the direction and at the same time standing in as the title track of the album, Peace (with my Demons) is a true club anthem, every bit as breathless as it is laid back. It is clear here that Candie Hank is the master of the irresistible four-note melody. Hovering over it all is the spirit of Groucho Marx, who also lent his name to the 2006 album Groucho Running.