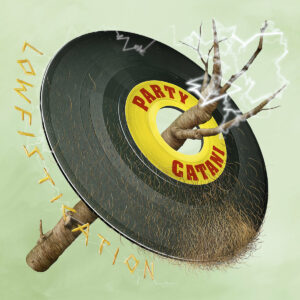 Sophistication = is the quality of refinement — displaying good taste, wisdom and subtlety rather than crudeness, stupidity and vulgarity but do you also sometimes ask yourself “what for” ???

Patric Catani – Producer of more than 80 records, projects and remixes including his work for Candie Hank, Puppetmastaz, and Driver&Driver – is back with his latest bassploitation party- slaughter album, Lowfistication!!

At the age of 16 he released his first record under the name E de Cologne, releasing music on the Beastie Boys label Grand Royal and spreading his music worldwide until now. He’s never stopped exploring new musical directions and, in our opinion, is one of the masters of kicking ass. Working with everyone from Jean Jacques Perrey to Kap Bambino, he’s mastered a range of styles such as Rap, Bounce, Soundtrack, Chiptune, Cumbia, Hardcore, Dadaswing, Surfacid,, Bass and that’s for starters! And here it is, 2011. Patric Catani still travels the world playing his concerts and DJ Sets frequently and built himself a rock solid Stonehenge of a fanbase following him from cave to cave.

We are proud to present “Lowfistication”! An album so full of fun that we had to re-name him yet again – Yes, this is Party Catani! Better get moving now! This album packs all the fun from your best-drunken nights with friends, your slightly vague memories that smell like cigarettes and beer that give you a headache the next day -a megawhopper of an album.

Bursting with screeching synths, samples from the archaic depth of human soul and hammering beats, you can find a bit of everything inside. From the banging acid-club infused “Beautiful” to the Booty-Juke of “Man From The Old School”, you’ll be surprised of this full menu of an album getting poured on yer plate by Catani. Breaks, Chip-tunes, Goaggressive Psy Plunderphonics and Hardstyle and even some tracks produced on his korean handheld game console with the notorious Piggy Tracker! All killer, no filler 🙂 You don´t wanna miss “Erotic Conflict” – his epic tribute to Jumpsytle that’ll have you wishing you were a long haired blond Dutch and buying extra cheesy bass bins! One Kiss – and he jumps away!

The CD release of Lowfistication comes with a special poster made by Martin Mueller featuring the whole Catani familia including Candie Hank, Toytone and Very Impossible Person. Swanky! (Text by Cockrock Disco)