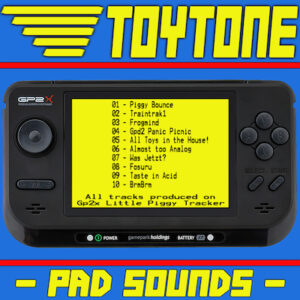 Patric Catani aka Toytone. Tracks produced on Gp2x Handheld console with the Little Piggy Tracker. The first officially released tracks of the Toytone project come as bassy as they wanna be. Varying between Club, Booty Bounce and an exaggerated approach of speed acid dub, you will notice that this collection was not done overnight.